This post marks the second part of my series on Scots. In the first part, I briefly outlined the history and present-day status of Scots. If you want a quick catch-up on the history but don’t feel like more reading, I recommend this video by the Angus McIntosh Centre – also available in Scots!

Hello, my lads and lassies! (Sorry, will never do that again.)

Today’s post is about the differences between Scots and English. Rather than give you a lengthy list of all the ways in which Scots differs from English, I will give you some examples and point out keys to identifying some of the more recognisable features of Scots – both historically and today. Consider this your handy guide to recognising the Scots language1.

As this is the Historical Linguist Channel, I will begin by showing you how to recognise Scots in older texts. If this is not your cup of tea, keep reading, there is something for you further down.

As you may remember from my previous post, Older Scots was quite clearly distinct from English2. When we want to determine whether a piece of historical text is Scots, there are certain features we can look for. I’ll give you an example of this, using lines from a 15th century Scots poem, The buke of the Howlat (lit. ‘The book of the Owl)3.

One straightforward way to find the Scots features of this poem is to look at the spelling, and spelling can to some extent also give us clues about Scots pronunciation4. As an example, see the following line:

Here, the <gh>5 spelling in light corresponds to <ch> in lycht. This spelling represents the sound that you might recognise from the ending of the word loch, meaning ‘lake’ (you know, where Nessie lives). If you want to be more technical, this is a voiceless velar fricative: [x]. This sound is still used in many varieties of Scots today.

This next example has more Scots features for us to unpack:

The strange long ‘s’, <ʃ>, is believed to sometimes represents the iconic Sean Connery pronunciation of /s/7. The first word begins with <quh->, and the correlating English spelling is <wh->; variations of <qu(h)-> are very typical Older Scots spellings, which only started to disappear in the 16th century once there was more influence from English in Scots writing. Then it was gradually replaced by the English <wh->. We are not quite sure whether this spelling also reflects a certain pronunciation, like /kw/8.

Finally, the spelling of certain word endings can also highlight features of Scots grammar. For example, the word faʃʃonit above, ending in <-it>. This is a suffix which marks past participles and adjectives, and its English equivalent is <-ed>, as in ‘I am old-fashioned’. In The buke of the Howlat we also find a typically Scots <-is> ending marking plural, as in foulis (‘fowls’; English plurals are commonly either marked by <-s> or <-es>). Present tense verbs are also marked with the <-is> ending in Older Scots: where we in English would have he sings, Scots has he singis.

Knowing about these historically Scots features helps us understand the relevance of certain features in modern Scots. It can, for example, help us figure out where certain pronunciations or word orders come from. I’ve so far used terminology which hints that some of these features have changed or disappeared. The influence by English over Scots starting in the 16th century, which I mentioned above, is commonly referred to the anglicisation of Scots (read more about the historical context for this in my last post), and it caused some decline of uniquely Scots features – especially in writing. However, as we shall see below, while some features were lost and some changed, Scots is a survivor and the modern language still uses versions of many distinctive features of Older Scots  as well as modern innovations. 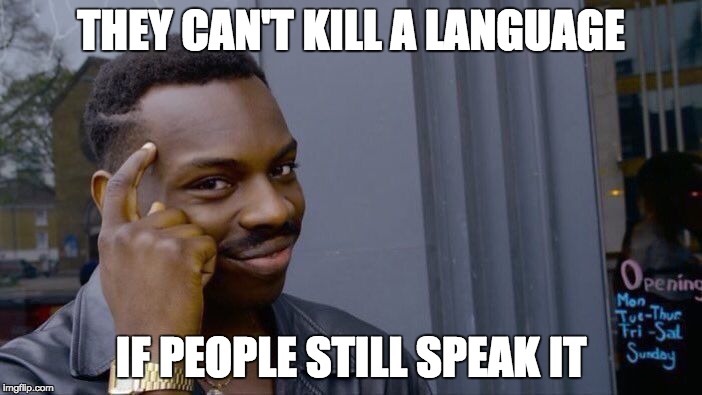 In my last post, I explained the complicated status of Scots in modern Scotland, and hinted about how much variation there is between speakers and regions as well as within the speech of one individual. Scots is not as present in formal writing as it was in its heyday, however Wee Windaes and similar sites give good example of what Scots looks like in such contexts – have a look and see how much you can understand, and where Scots differs from what you’re used to reading.

We also find plenty of good examples of modern, colloquial “Scotticisms”9 in writing, mixed  with some English. A good source of this: Scottish twitter! Reader discretion is advised; the following tweet reproductions contain strong language.

Note that the c-word is used very lightly in Scotland, sometimes even replaceable with ‘mate’.

The Scots feature I want to pick out specifically from this tweet is negation: Dinny is used where we would expect don’t if it had been written in only English. This is probably one of the most recognisable Present-Day Scots features, and -ny, or -nae, can be added to most auxiliary verbs where English would have n’t: dinny, hasny, cannae, and so on. This tweeter also uses the instead of to in “the jail” – this is something I’ve noticed Scots speakers do a lot, even saying ‘the day’ rather than ‘today’.

This tweeter not only puts into words what we all feel sometimes when we think about the state of the world, but also gives us some more excellent examples of Scotticisms. Here, I want to bring attention to the word yersel (‘yourself’), used twice. A typically Scots pronunciation feature is to not pronounce /f/ in words like self, and here we see it reflected in spelling.

Finally, Exhibit C: The iMessage conversation extract below is attached to a tweet by @jordanjonesxo. 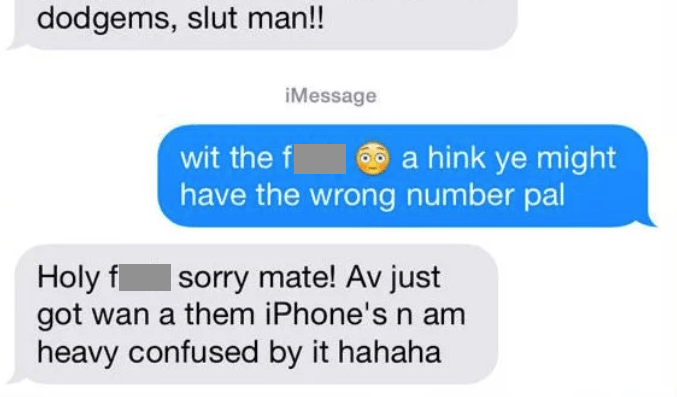 Diverting your attention from the foul language, notice how hink is used for ‘think’. This is, as you would expect by now, reflecting a Scots pronunciation: /h/ where English has /θ/.

I haven’t mentioned all of the Scots features in these tweets – I’m sure you’re able to identify some without my help. Other features that we often see in this form of writing is aw where we expect ‘all’ and fae where we expect ‘from’. The former is an example of Scots “l-vocalisation”, meaning that /l/ is not pronounced at the end of words. The latter is simply the Scots word for ‘from’ – fae, ken (‘know’), wee (‘little’), bairn (‘child’) and mind (‘remember’) are only a few examples of Scots words which are very commonly used in Scots speech today even when mixed with English. 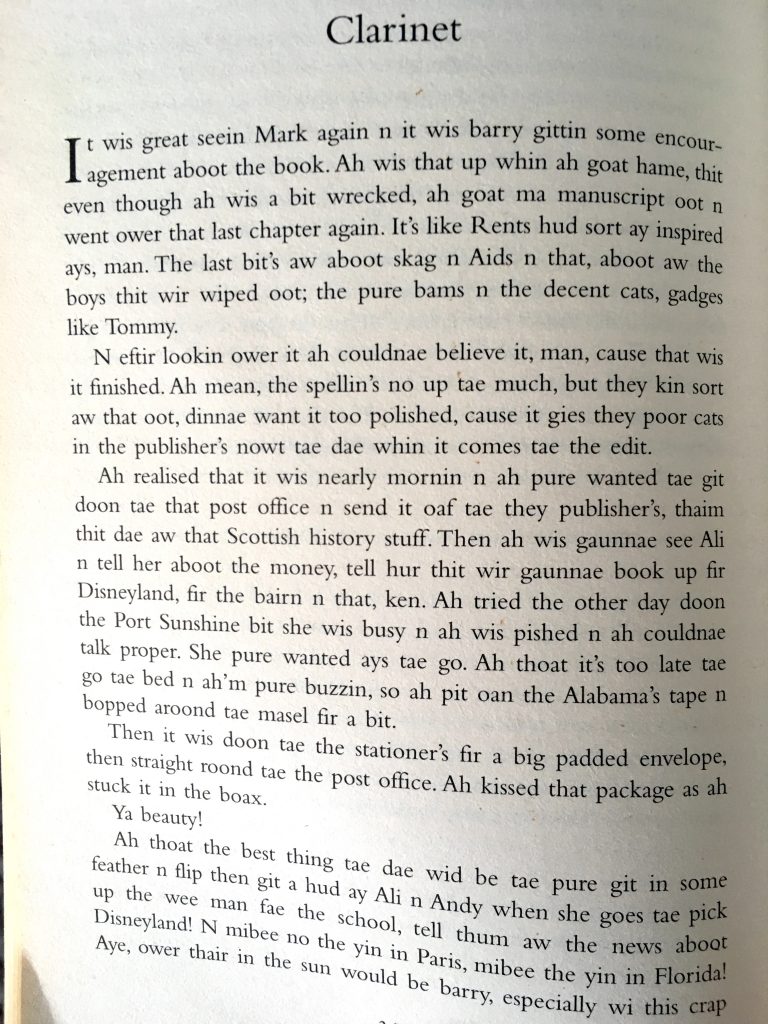 Let us know what you found, tell us your favourite Scots word, and ask us any questions about this post – either by commenting here or on Facebook, or by emailing us (adding Lisa to the subject line will lead it straight to me).

If you now, after all this reading of Scots, want to get a good example of what it sounds like, here are some links (some repeated from earlier in the post):

The Angus McIntosh Centre’s video on the origin of Scots, in Scots.

Listen to the Buke of the Howlat (to the left on the page).

Some more examples of Scots words.

Next week, Riccardo will bust the myth that some languages are just essentially harder to learn than others. Nay!, says we at the HLC.

1Bear in mind that some of the features I bring up here are not uniform for all varieties of Scots.

2However, we also want to remember that Scots developed from a variety spoken in the North-East of England, and so some of the features described here can sometimes be found in documents from there as well. As always, we need to bear in mind that the boundaries of a “language” is not determined by national borders – see my previous post on languages and dialects.

3This analysis is based on previous work by Dr. Rhona Alcorn, Daisy Smith, Maddi Morcillo Berrueta and myself for the National Library of Scotland’s Wee Windaes website. You can find the complete version here. At Wee Windaes, you can also listen to the poem being read in Scots.

4If you’re particularly interested in mapping sounds to spelling in Scots, I recommend reading about the FITS project.

5This spelling in English used to represent the same [x] sound which is no longer a part of the English phonemic inventory.

6Abbreviations are common in old manuscripts, just imagine writing a whole book by hand! This particular one correlates to some form of ‘quoth’, as seen in the translation.

9I believe this term was coined by A.J. Aitken, if I’m not mistaken.

10Not everything here is straightforwardly Scots, rather a representation of Scottish English, but as I’ve repeated many times by now: It’s complicated!