If you remember last week’s post, or if you speak English at all, you’ll remember that sometimes English words can behave… bizarrely.

Last time, we explored the reason why some plurals (like mice or geese) can be totally out of control. Today, it’s time to look at their far more complicated cousins, the so-called “irregular” past tense verbs. These are really part of a wider Germanic phenomenon called strong verbs, but their roots sink much, much further in the past. If you’re a native English speaker, maybe you’ve wondered from time to time why some verbs change so drastically in their past tenses; if you are or have been an English learner, you probably remember memorising those frustrating tables in school. 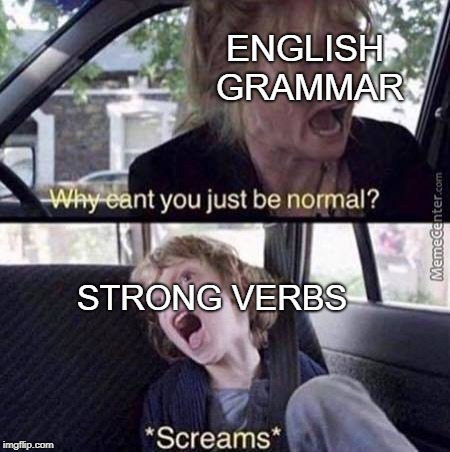 No, not the fairy tale ones. The anthropomorphised linguistic abstraction ones.

We already thoroughly acquainted you with umlaut, and today we’re going to introduce his big sister, ablaut.

Hold on tight, this is going to be a wild ride!

If you thought umlaut was old, get a load of this: his older sister ablaut goes back to Proto-Indo-European!

Her name literally means “sound gradation” in German, and she was given a name by none other than our old friend Jacob Grimm.

He (and other linguists during his time) noticed that in some Germanic verbs vowels alternated according to a predictable set of patterns. You might know these patterns as the so-called “irregular” verbs of English, such as swim/swam/swum.

Such patterns exist in all Germanic languages, but our linguist friends noticed that similar phenomena could be seen in other Indo-European languages, and not only in verbs. Ancient Greek, for example, exhibits similar patterns in nouns as well as verbs, and ancient Indian grammarians such as Panini had noticed it happening in Sanskrit millennia before, giving the different vowel grades fancy names such as guna and vrddhi.

From this evidence, our fearless heroes deduced that this system of vowel changes must go much further in the past than the birth of Germanic languages.

Today’s leading hypothesis is that all these changes spark from the same little source: the humble PIE vowel /e/.

This little vowel was PIE’s most important vowel. In fact, according to some theories, it might even have been its only vowel at some very early stage! How did the other vowels come about? Well, /a/ probably originated from a neighbouring consonant’s effect on /e/, while /i/ and /u/ probably arose out of the semivowels /j/ and /w/ respectively. The vowel /o/, on the other hand, came about because of ablaut.

You see, PIE /e/ was pronounced (or not pronounced, see below) in various, different ways depending on its position and the position of the main stress in the word. We call these different ways of pronouncing this most basic of vowels grades. Unfortunately, nobody has ever been able to figure out why this happened exactly, but we’re working on it, we promise. 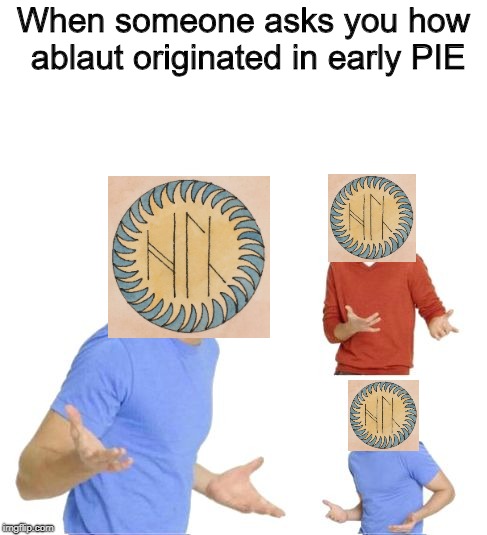 In total, there were three basic grades and two lengthened grades. Let’s take a look at these changes using various forms of the PIE word *ph2ter-, ‘father’, as examples.[1] In these, the acute accent (é) indicates stress.

The three basic grades were the e-grade, which occurred when the stress was on the concerned vowel, as in

The o-grade, which turned the /e/ into /o/, and occurred when the stress came before the vowel, as in

And the zero-grade, where the /e/ just disappeared, which occured when the stress came after the vowel, as in

When the e- and o-grades were found in the last syllable of a word, they became long vowels, giving rise to the lengthened grades (a line on the vowel, called a macron, indicates length), as in

Thousands of years of sound change in English have erased the effects of ablaut in nouns, but they can be seen in Ancient Greek. Using our examples above, here’s how they evolved in the language of Socrates:

This system of changes also applied to verbs, and, believe it or not, in early PIE all verbs behaved like the English irregular verbs! What a nightmare, eh?

Don’t commiserate the poor Indo-Europeans, though. At the time, these changes were perfectly predictable and regular.

Ten thousand years of sound change tend to wreck even the most clockwork-like of systems, however, and by the time Proto-Germanic made its entrance on the stage, the simple e/o/nothing system of Indo-European had been scrambled into a complex mess of vowels.

Proto-Germanic strong verbs are divided into seven classes, depending on the path that humble PIE /e/ took in its evolution into all the vowels we know and love today.

The… messy evolution of vowels in English certainly didn’t help, and while today these seven classes of verbs still technically exist, they’re very hard to tell apart. The strong verbs of English have become for all intents and purposes irregular, which is what they’re called in school grammars everywhere.

What about regular verbs (also called weak verbs) then? Well, some of them were once strong verbs which became weak somewhere along their history (such as show/showed, which was once show/shew), but most of them were not originally verbs at all! Proto-Germanic weak verbs come from other words (mostly nouns) which got turned into verbs through derivation.

So here’s the plot twist: irregular verbs are not rebels at all! They’re old fogeys, shaking their heads and tutting at the young and hip regular verbs staring at their mobile phones all day.

Life is full of surprises.