Lies your geography teacher told you

We all know that each country has one and only one language, right?

In China they speak Chinese, in England they speak English, in Iran they speak Farsi, and each language is neatly contained within the borders of its respective state, immediately switching to another language as soon as these are crossed.

Well, if you’ve been reading our blog, you have probably become rather sceptical of categorical statements like this, and for good reason: it turns out, in fact, that a situation like the one described above is pretty much unheard of. Languages spread across borders, sometimes far into a neighbouring country, and even within the borders of a relatively small state it’s not uncommon to have four or five languages spoken, sometimes even more, and large countries can have hundreds or more.

Then there’s the island of New Guinea, which fits 1,000 languages (more than some continents) in an area slightly bigger than France.

And yet, this transparent lie is what we are all taught in school. Why? Well, you can thank those dastardly Victorians again.

Before the rise of nationalism in the late 18th century, it was common knowledge that languages varied across very short distances, and being multilingual was the rule, not the exception, for most people. Even as a peasant, you spoke the language of your own state and one or two languages from neighbouring countries (which at the time were probably a few miles away, at most). Sure, most larger political entities had lingua francas, such as Latin or a prestige language selected amongst the varieties spoken within the borders (usually the language of the capital), but this was never seen as anything more than a way to facilitate communication.

It was the Victorian obsession with national unity and conformity which slowly transformed all languages different from the arbitrarily chosen “national language” into marks of ignorance, provincialism, and, during the fever pitch reached in the 1930s, even treason; this led to policies of brutal language suppression, which resulted the near-extinction of many of the native languages of Europe.

Why then is this kind of thing still taught in schools? Because, sad to say, things have only become slightly better since those dark times. Most modern countries still accept the “One Nation, One Language” doctrine as a fact of life without giving it a second thought. Some countries still proudly and openly enact policies of language suppression aimed at eliminating any language different from the national standard (je parle à toi, ma belle France…).

Which brings me to our case study: my own Italy.

Given my tirade above, it should not come as a surprise to you now when I tell you that Italian is not the only language spoken in Italy. Not by a long shot. In fact, by some counts, there are as much as 35! The map below shows their distribution. 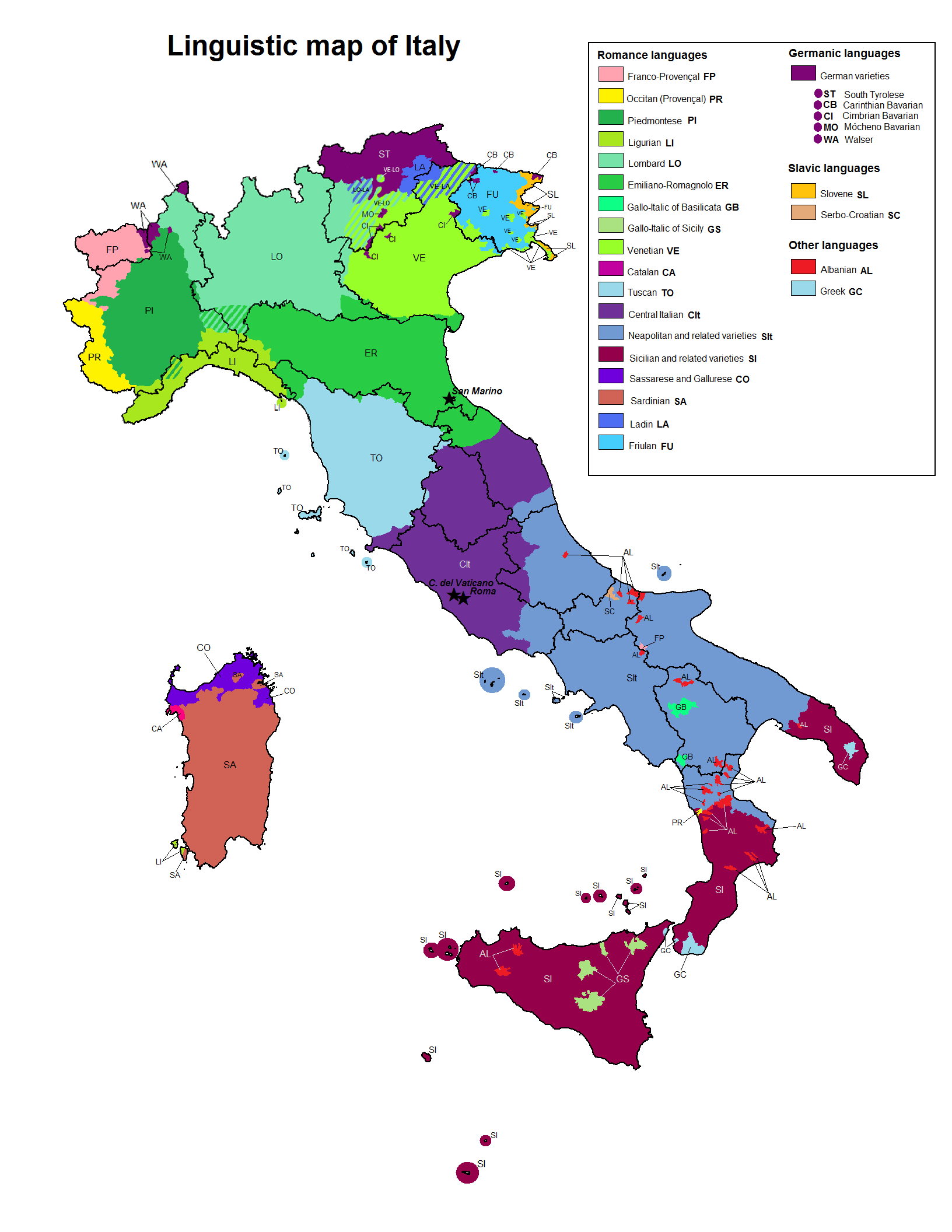 What is today known as Standard Italian (or simply Italian) is a rather polished version of the Tuscan language (shown as TO on the map). Why not Central Italian, the language of Rome? For rather complex reasons which have to do with the Renaissance, and which we won’t delve into here, lest this post become a hundred pages long.

Even though Italy stopped enforcing its language suppression policies after WWII, it is a sad fact that even the healthiest of Italian languages are today classified as “vulnerable” by UNESCO in its Atlas of the World’s Languages in Danger, with most of them in the “definitely endangered” category.

The Italian government only recognises a handful of these as separate languages, either because they’re so different it would be ludicrous to claim they’re varieties of Italian (such as Greek, Albanian and various Slavic and Germanic languages spoken in the North), or because of political considerations due to particularly strong separatist tendencies (such as Sardinian or Friulan, spoken in the Sardinia and Friuli-Venezia Giulia regions, respectively). All other languages have no official status, and are generally referred to as “dialects” of Italian, even though some are as different from Italian as French is![1]

Stereotypically, speaking one of these languages is a sign of poor education, sometimes even boorishness: in the popular eye, you’re not speaking a different language, you’re simply speaking Italian wrong.[2]

To see how deep the brainwashing goes: suffice to say that it’s not uncommon, when travelling to areas where these languages are still commonly spoken, to address a local in Italian and receive an answer in the local language. When it becomes clear to them that you don’t understand a word of what they’re saying, the locals are often puzzled and surprised, because they’re sincerely convinced they’re speaking Italian!

To better highlight the differences between Italian and these languages, here’s the same short passage in Italian and in my own regional language, Emilian (Bologna dialect):

You can hear the Italian version read aloud here, and here is the Emilian version[3].

Here’s the English version of the same passage for reference:

The North Wind and the Sun were disputing which was the stronger, when a traveller came along wrapped in a warm cloak. They agreed that the one who first succeeded in making the traveller take his cloak off should be considered stronger than the other.

It is pretty hard to argue that these two are the same language, and yet this is what most people in Italy believe, thinking of Emilian as a distorted or corrupted form of Italian.

Compare this to the situation during the Renaissance, when Emilian was actually a very prestigious language, to the point that Dante himself once wrote an essay defending it from those who would claim the superiority of Latin, calling it the most elegant of the languages of Italy.

Italy is by no means an isolated example, as I’ve already made clear in the first section of this post: wherever you go in the world, you’ll find dozens of languages being suppressed and driven to extinction due to myopic language policies left over from an era of nationalism and intolerance.

The good news is that the situation is improving: in Italy, regional languages are not stigmatised as they once were. In fact, many people take pride in speaking their local language, and steps are being taken to teach it to the youngest generations and preserving them through literature and modern media. However, the damage done in the past is enormous, and it will take an equally enormous effort to restore these languages to the level of health they enjoyed a hundred years ago. For some of them it might very well be too late.

So if you speak a minority language, or know someone who does, take pride in it. Teach it to your children. They’re not “useless”, they’re not marks of poor education, they are languages, as dignified and deep as any national language.

And don’t mind the naysayers: whenever someone tells me Emilian is a language for farmers, incapable of the breadth of expression displayed by Italian, I remind them that when Mozart studied music in Bologna, he spoke Emilian, not Italian; and that when the oldest university in the western world opened its doors in 1088, and for 700 years after that, it was Emilian, not Italian, that was spoken in its halls.