Lies your English teacher told you: “Never split an infinitive!”

To start off this series of lies in the English classroom, Rebekah told us last week about a common misconception regarding vowel length. With this week’s post, I want to show you that similar misconceptions also apply to the level of something as fundamental as word order.

The title paraphrases what is probably one of the most recognisable examples of prescriptive ungrammaticality – taken from the title sequence of the original Star Trek series, the original sentence is: To boldly go where no man has gone before. In this sentence, to is the infinitive marker which “belongs to” the verb go. But lo! Alas! The intimacy of the infinitive marker and verb is boldly hindered by an intervening adverb: boldly! This, dear readers, is thus a clear example of a split infinitive. 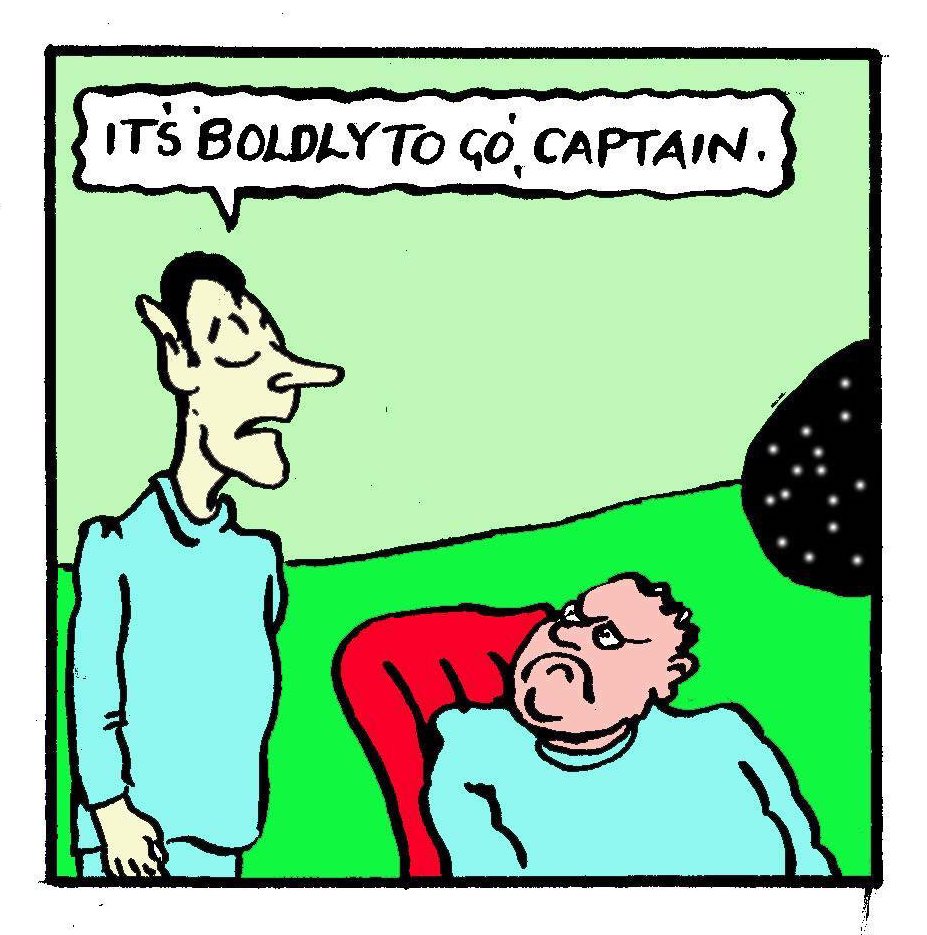 Usually an infinitive is split with an adverb, as in to boldly go. This is one of the more recognisable prescriptive rules we learn in the classroom, but the fact is that in natural speech, and in writing, we split our infinitives all the time! There are even chapters in syntax textbooks dedicated to explaining how this works in English (it’s not straightforward though, so we’ll stay away from it for now).

In fact, sometimes not splitting the infinitive leads to serious changes in meaning. Consider the examples below, where the infinitive marker is underlined, the verb it belongs to is in bold and the adverb is in italics:

(a) Mary told John calmly to leave the room

(b) Mary told John to leave the room(,) calmly

Say I want to construct a sentence which expresses a meaning where Mary, in any manner, calm or aggressive, tells John to leave the room but to do so in a calm manner. My two options to do this without splitting the infinitive is (a) and (b). However, (a) expresses more strongly that Mary was doing the telling in a calm way. (b) is ambiguous in writing, even if we add a comma (although a little less ambiguous without the comma, or what do you think?). The only example which completely unambiguously gives us the meaning of Mary asking John to do the leaving in a calm manner is (c), i.e. the example with the split infinitive.

This confusion in meaning, caused by not splitting infinitives, becomes even more apparent depending on what adverbs we use; negation is notorious for altering meaning depending on where we place it. Consider this article title: How not to raise a rapist2. Does the article describe bad methods in raising rapists? If we split the infinitive we get How to not raise a rapist and the meaning is much clearer – we do not want to raise rapists at all, not even using good rapist-raising methods. Based on the contents of the article, I think a split infinitive in the title would have been more appropriate.

So you see, splitting the infinitive is not only commonly done in the English language, but also sometimes actually necessary to truly get our meaning across. Although, even when it’s not necessary for the meaning, as in to boldly go, we do it anyway. Thus, the persistence of anti-infinitive-splitting smells like prescriptivism to me. In fact, this particular classroom lie seems like it’s being slowly accepted for what it is (a lie), and current English language grammars don’t generally object to it. The biggest problem today seems to be that some people feel very strongly about it. The Economist’s style guide phrases the problem eloquently3:

“Happy the man who has never been told that it is wrong to split an infinitive: the ban is pointless. Unfortunately, to see it broken is so annoying to so many people that you should observe it.”

We will continue this little series of classroom lies in two weeks. Until then, start to slowly notice split infinitives around you until you start to actually go mad.

1 I’ve desperately searched the internet for an original source for this comic but, unfortunately, I was unsuccessful. If anyone knows it, do let me know and I will reference appropriately.

2 This very appropriate example came to my attention through the lecture slides presented by Prof. Nik Gisborne for the course LEL1A at the University of Edinburgh.

3 This quote is frequently cited in relation to the split infinitive, you can read more about their stance in the matter in this amusing post: https://www.economist.com/johnson/2012/03/30/gotta-split